So today is the day that many coin collectors have been waiting for.  It is the official release of the new 12 sided £1 coin.  Being an newbie coin collector I have certainly been looking forward to its release.  So much so that Dan booked us a tour of the Royal Mint so that we could mint our own new coins before its release date.

The tour of the mint was such an amazing experience.  You get to have a front row seat of the

coins being made on the factory floor, you learn about what it takes to make a coin from the materials down to what each machine does to the metals to make it into the finished product, and finally you get to see all the old coins that they have there; some of which are dating back to the 16th century.  For any one who lives in the area I would highly recommend this as a trip for people of all ages.

scramble for collectors to own all of the old round pounds which was aptly named The Great One Pound Coin Race.  There was one pound coin however, that you would not be able to find in your change and that was ‘The Last Round Pound’.  This coin is a collectable item which can only be purchased from the Mint its self.  I am so pleased to say that I am the proud owner of one of these coins.  They are beautifully designed with all of the mythical creatures from the four countries that make Britain great!

Have any of my lovely followers been on any cool day trips recently? If so I would love to hear about them!

There is a young woman in this world who wants nothing more than to be happy. Lost a mother at a youngish age which effected her more that she ever realised. She has spent her days watching other people doing every day things with their mother as she has grown. Shopping, taking short breaks, having afternoon tea, going for spa days. She has always wondered what she would be doing with her mother had she still been here.

She puts on a front for the world. Every morning applying the face that she thinks is acceptable to society. Just wanting I be accepted for who she is. Over time she became very close to her grandfather. Confiding her thoughts, experiences and concerns to him. They became fast friends after a distant childhood relationship with him. He is her number one, her main man, her voice of reason and her source of sanity. When the whole world seems to have gone mad he is the one person who shares her opinions and outlooks. He helps her through tough times.

December 2016 all this came crashing down when he was hospitalised. He never came home. Despite the fact that she has a boyfriend, grandmother, father and brother left she feels totally alone because her confidant is gone. Still she puts on that front and carries on as best she can. Only letting the tears flow when she knows that she is alone.

Faced with health issues of her own she tries to keep her spirits up.  Not always able to do so but she tries her best.

The boyfriend. Not a perfect human but who is. Damaged by his upbringing yet not realising it. Father at a young age yet not in touch with his child. Part of her believes that this may be down to his own aggressive actions in the past. He is the type of person who is always longing for acceptance. Wants to be the best at everything yet not willing to work for this. Happy to take credit for the littlest of things even if it wasn’t totally his achievement. Useless with finances yet never appreciates everything she does to give him the life that he is currently living. He has it all in her eyes, yet he is never satisfied. Always wanting more.

The grandmother. Another broken soul, lost the love of her life but still tries her hardest to make the best of every day. The strongest person she knows. To have gone through so much and still manage a smile is more than an acomplishment. The girl will do all she can to help her grandmother and always will as she is the only constant person left in her life.

The father. Another person who has been through so much loss. Has worked hard to provide for his children but you can see it has been a struggle. Being a single parent was not something he thought he would have to deal with. He has done a good job despite a few hiccups along the way. She loves her father and would do anything to help him. He now has a new girlfriend and despite the baggage she thinks he is happy and this in turn lessens the worry she has once felt for him.

The brother. Never present but she loves him more than he realises. Querky, dry sense of humour but that’s what makes him who he is. She could be in pieces but one call from him can lift her spirits, not that he knows this.

Despite all these people, she still feels totally alone. The loss she has been through in her short life is becoming more that she can bear. No outlet to discuss feelings, thought and worries with. No one that she feels could understand anyway.

Powering through day by day trying to better herself but not necessarily achieving this ever moving goal. Another day another drama. Will it ever end.

I had a new carpet fitted in my bedroom over the weekend and with this being the only component left to modernise the room from the old lady style decor of the person I bought the house from I felt that I wanted my night stands to match the room but I didn’t want to buy new ones just yet. I decided that vinyl wrapping them would hide the ugly worn marks that they had and bring them in line with the new colour scheme of the room.

Here is how they turned out.  The first one took a bit longer and as really ain’t a pro at this it did take some time to get them right.  I am really pleased with the finish and it was the perfect project for a rainy day.

I started from the top and worked my way down the cabinet. The top drawer was the trickiest because of the frosted window in it but after some perseverance I got there in the end! The handles were removed to give a professional finish.

Here are some half way through pics showing the progress I was making.  It may have been very slow progress but I was progress non the less! perseverance is key when it comes to vinyl wrapping.  It really isn’t for those with a short temper. 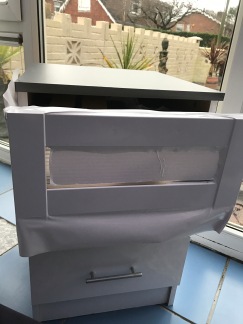 Cheeky one down, one to go shot! 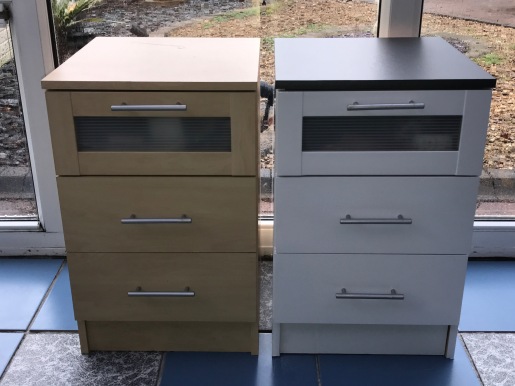 I was really pleased with the difference that a clean finish made.  Almost makes them look like new.

I would love to know you thoughts on this upcycling project and I would like to hear about your projects.

There’s something about the warm milky glow of spring sunshine filtering through the roadside trees as you make your way to work that really sets the tone for a good day!

So another month over and done with.  All in all it has been a pretty good one. During the last month I have had some ups and downs.

I have had another birthday which now puts me at the grand old age of 29! Scary right?! This was the first birthday without my Gramps here which was real hard.  Opening my card signed just from my Nan, not having the phone call with his soft cheery voice to sing happy birthday to me it all got the better of me but I just keep thinking ‘thank god he is no longer in pain!’.

Over the last couple of months I have had some serious health issues which could have totally altered the course of my future, or at least where I thought my future was heading, and yesterday I got some great news from the hospital confirming that the result have come back to say what I had hoped they would and they don’t need to see me again.  I have never felt such relief like I did when I read that letter!  However, having this scare has really made me put things into perspective.  It made me realise all the things that I have been missing out on which I intend to change!! Holidays being the first.  I want to see more sights, both home and away.  It got me thinking that if that was the end I was not happy with what I have achieved.  It is now time to set things right!

As a result of the realisation of my mortality I have decided to put everything I have into revamping and rebranding my online store.  Keeping it inline with this blog I decided to make it into a brand and I have started to put some of the wall art ideas I have had over the last year or so onto the drawing board.  I have actually started to list some new items which have taken off quite well. below are a few of the new items I have listed.

you can find the rest of my items on my Made by Mel tab in the main menu.  I am determined to make this a success and I plan on putting my all into it.

I have been trying lately to get back into my crafts and I have made quite a promising start I think.  I have been trying my hand to candle printing to see if it was something think I would like as I am in to my candles big time.  Dan thinks I secretly own shares in a candle company because of the amount I have! Here’s a sneak peak at my first attempts. 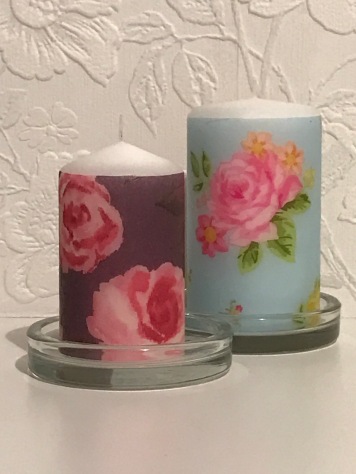 Meet Me at Beachcomber Bay (reviewed)

Secrets of Happiness by Lucy Diamond

A Year of Being Single by Fiona Collins

That seems to be everything I can think that has happened within the last month and as I said all in all its been a good month.  I will be trying to keep up to date on everyone else’s monthly round ups as I love to know what everyone has been getting up to. How has your last month been? Let me know… Speak to you all soon.